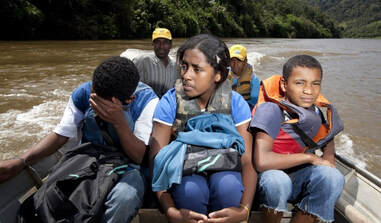 Photo Credit: Rafael Pieroni
I have more than ten years of experience as a journalist covering politics, human rights, and other social issues. As a reporter and editor, I developed in-depth knowledge about education systems in Latin America and other countries, including the United States and Finland. In 2009, I was invited by the Finnish Embassy in Brazil to travel to Finland to study its educational system; I also traveled to Atlanta in 2008 and 2009 to write stories on accountability policies in education.  In 2011, I was a finalist of the 10th Ayrton Senna Prize with the article "Cotidianos em Contraste", a long-form journalism piece about the daily work routine and challenges for four teachers in São Paulo, Brazil. I have also covered a number of issues for other Brazilian news outlets, including the 2012 U.S. presidential election for Globo.com.

My most important pieces (in Portuguese) include:

For BBC Brasil, I interviewed historian Martha S. Jones about her new book Vanguard - How Black Women Broke Barriers, Won the Vote and Insisted on Equality for All. Jones also discusses the role of women in the 2020 U.S. presidential election.

For Globo.com, I wrote three stories about the 2012 U.S. presidential election in North Carolina. The first explains the state's voting system. The second discusses the mixed feelings of North Carolina voters regarding former president Barack Obama. The third assesses the political climate in the state after his reelection.

For Educação, one of my most significant pieces highlighted the conditions of students - especially minorities - in rural schools in the state of Sao Paulo ("Problemas Comuns"; see picture to the right). In another story, I identified and investigated a mistake in the mathematical formula used by the Rio de Janeiro municipality to calculate bonuses for teachers.