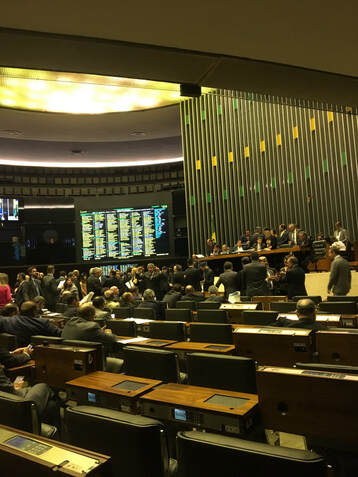 Legislative Effectiveness in Comparative Perspective: The Case of Brazil's Chamber of Deputies
​What explains variation in legislative effectiveness where party systems are fragmented and not policy-oriented? This book project addresses these questions by examining the drivers of legislative effectiveness (i.e., the ability of lawmakers to move their agenda items through the legislative process and into law) in Brazil’s Chamber of Deputies. Most Brazilian parties do not hold strong policy commitments  and provide few incentives for effective lawmaking. Furthermore, Brazil's party system suffers from hyper-fragmentation: the average number of effective parties (Laakso & Taagepera, 1979) in the last two congressional sessions was 12.2, the highest in the world. Given these conditions, legislators have few incentives and face high barriers to propose and approve legislation, a task that has become ever more difficult in the context of increasing party system fragmentation. How is effective lawmaking viable under these circumstances?

I propose a theoretical framework that gives equal weight to formal and informal institutions as drivers of effectiveness in fragmented legislatures with less programmatic parties. As in the United States, legislators who occupy party leadership and committee chairmanship positions are more effective than their peers. However, the overall context makes association with legislative member organizations an equally important driver of effectiveness in Brazil. LMOs are cross-partisan caucuses focused on policy issues. The book provides evidence through a mixed-methods analysis of original data collected from nine months of in-country fieldwork. Quantitative evidence includes a new measure of effectiveness for legislators in Brazil’s lower house; this measure adapts the Legislative Effectiveness Score (LES) developed for the U.S. Congress by Craig Volden and Alan Wiseman. Qualitative evidence includes data from semi-structured interviews with 74 legislators, legislative staff, LMO members and coordinators, and civil society representatives.

Racial Politics and Legislative Effectiveness: Comparing Brazil and the United States
This project examines the role of race in lawmaking efforts in the United States and Brazil. Given the demographics – 55.5% of the Brazilian population is Black, compared to and 13.4% of the population in the United States – it is puzzling that a formal Black Caucus exists in the U.S. Congress but not in the Brazilian Congress. As such, the project seeks to answer three questions. First, why did a Black Caucus emerge in the United States but not in Brazil? Second, what factors drive the effectiveness for Black legislators in both countries? Third, to what extent does the Black Caucus impact U.S. lawmaking efforts? The project relies on a mixed-methods approach that combines qualitative data from semi-structured interviews in both legislatures and quantitative data from legislative effectiveness scores in Brazil and the U.S. With this project, I aim to provide insights into whether racial caucuses facilitate or hinder the production of public policies – especially those that address the marginalization of minorities. As such, this research has direct bearing on how multiracial democracy functions in both countries.

Financial Resources and Framing: The Case of the Gun Control Referendum in Brazil
In 2005, Brazil conducted a referendum that allowed citizens to decide whether the sale of guns and ammunition should be prohibited. In July of the same year, 80% of Brazilians declared they would vote “Yes”. After being exposed to propaganda and media coverage for three months, a surprising percentage of 63.9% of Brazilians voted “No”. Why did citizens abruptly change their minds? Using content analysis of advertisements and news articles, and data collected from the Brazilian Superior Electoral Court, this study proposes two explanations to this puzzle. First, the framing strategy of the “No” campaign was a powerful driver of this shift. “No” frames were recurrent, simple, negative, symbolic, and individual-focused. Furthermore, they were conveyed by a reliable framing source. Second, financial resources seem to be a critical explanatory variable for the success of the “No” campaign. I find that the “No” advocates had substantially more financial resources than the “Yes” supporters, receiving large donations from the gun industry and recreational gun users. These resources were used to “buy” framing expertise. These findings shed light on a theme that has not been explored by the existing literature: the relationship between financial resources and framing.